NOTE: The Geoversiv Foundation was a Lunar-level sponsor of the Dawn of Private Space Science symposium in both 2017 and 2018.

At the inaugural Dawn of Private Space Science Symposium, at Columbia University in June 2017, three organizations came together to chart a new course for collaborative networking of space-based Earth science resources. The Madison River Group and the BoldlyGo Institute joined the Geoversiv Foundation in the foundational brainstorming session for the creation of a networked Earth-systems science initiative. 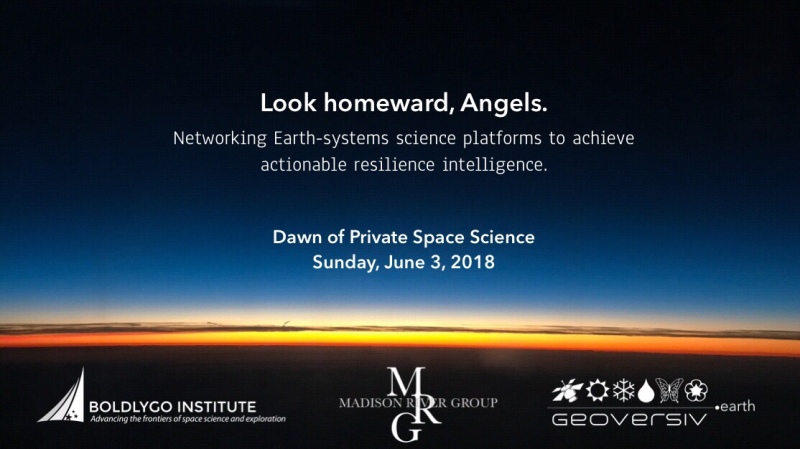 Three big challenges were on the table in that first discussion:

Tom Armstrong, Founder and President of the Madison River Group, and former Director of the US Global Change Research Program, explains:

At the end of the day, we want to design an Earth systems science approach that’s deals in a timely, multiscalar and adaptive way with issues that are affecting people today, in real time.

Sir Francis Bacon said “Nature, to be commanded, must be obeyed.” In other words, if we are to work with, build on, and leverage the resources provided by the natural world, we must operate according to its laws and limitations. Science is what allows us to do this, and so as our technology and industry advance, we are ever more in need of science-based decision-support for smart planning at all levels.

The Internet has given us the possibility of connecting computers, little engines of information, across the world. It now allows us to network constellations of resources together into a new fabric of human knowledge, communication and understanding.

We are working to build a constellation of constellations, integrating Earth observing devices at all levels (in space, on the ground, underwater), to ensure continuity of observation and open availability of vital Earth systems health information. 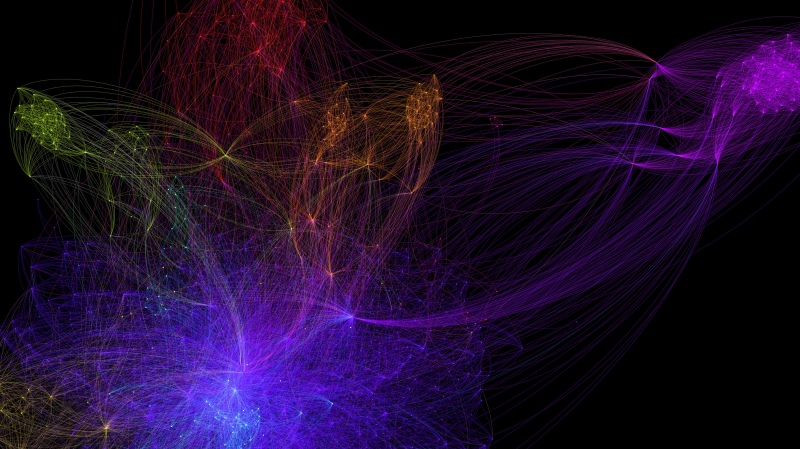 Artificial intelligence now allows us to connect networks to networks intelligently, and to map their interrelationship. Distributed ledger technologies (DLT) now also provide us with a powerful new tool for ensuring that even our understanding of provenance — what leads to what, influencing outcomes in what way — can evolve over time, as the overall record keeps developing detail and interactive intelligence.

This kind of effort will need to embrace complexity and commit to an evolving, adaptive multiscale, multidisciplinary approach, to avoid building-in rigid preferences for specific kinds of data. 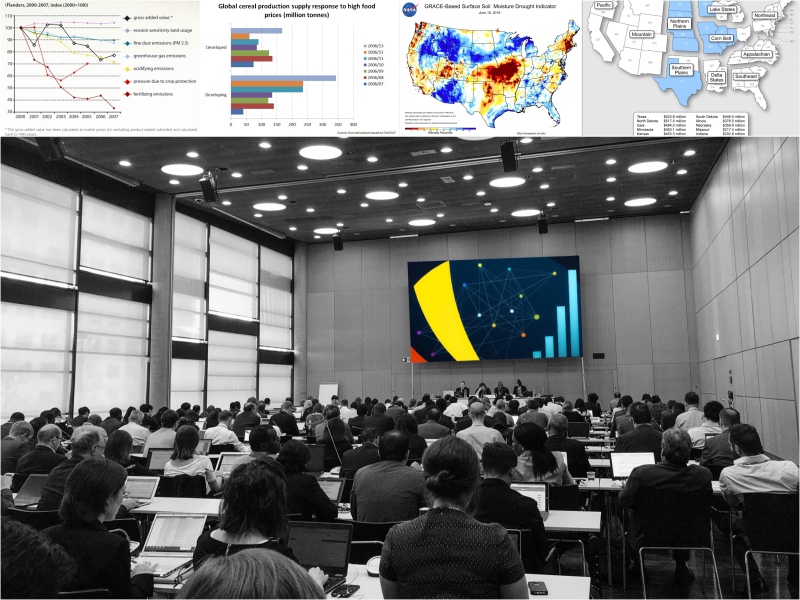 If we embrace the power of connecting these different kinds of data, we can much better visualize the macro-critical influences moving through whole economies. And, most importantly, we can translate high-level Earth-observing science into actionable insight for local actors.

Most of what we observe today, already, in terms of climate impacts are issues people are living with in their everyday lives, locally. Yet the science is done at planetary scale, and with models that look decades into the future. So, we need to be able to develop complex, adaptive, multiscalar systems for translating planetary science insights into local meaning and local choices.

You can invest well for the future, according to proven standards, and still lose everything, because you missed the structural threats to that investment. Investing $5.1 trillion in climate-forcing fuels, for instance, loads all other finance with unmanageable future risks and so devalues opportunity across whole economies. 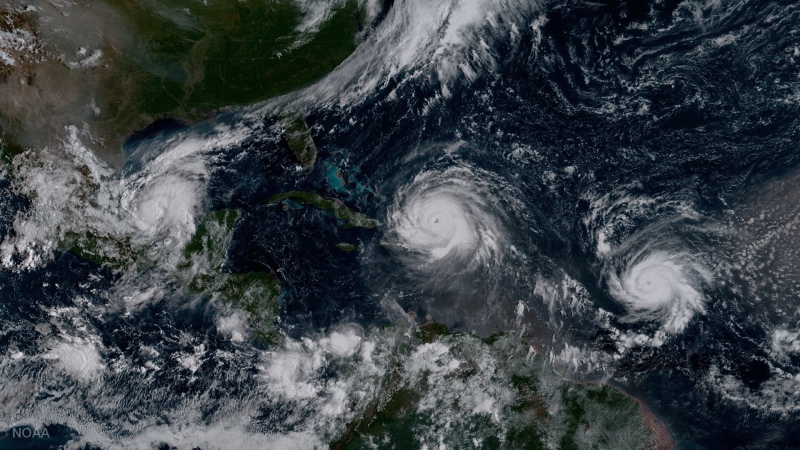 This is why, in 2015, the IMF adopted the position that spending to emit climate-forcing fuels is “destructive spending”, and that national wealth and national solvency should include calculations that take this and other economy-shaping “Nazca lines” into account.

Over three years of diplomatic dialogues, we have been told by leaders in all sectors they need tools to allow non-expert decision-makers to make high-confidence climate-smart choices, without first becoming experts. This has led to the creation of something called Resilience Intel — in effect a climate-smart decision engine, providing actionable intelligence about financial and spending choices, relating to observed, interactive macro-critical resilience ratings.

We are also working to integrate networked Earth-systems science constellations into Resilience Intel, so we have at the same time:

Joe Robertson, who is Founder and President of Geoversiv, Global Strategy Director for Citizens’ Climate Education, and the lead strategist in the Resilience Intel effort, put it this way:

At UN talks just weeks before the presentation of this work at the 2018 Dawn of Private Space Science Symposium, Robertson noted:

It is in the interest of all financial actors to begin moving all financial priorities toward a new standard of ever-increasing climate intelligence.

In the city of Minneapolis, where Geoversiv is based, you can look out over a couple of city streets and see the built environment subsumed in a lush forest, which traces and also spills over a horizon that is wide enough to show the curve of the planet. 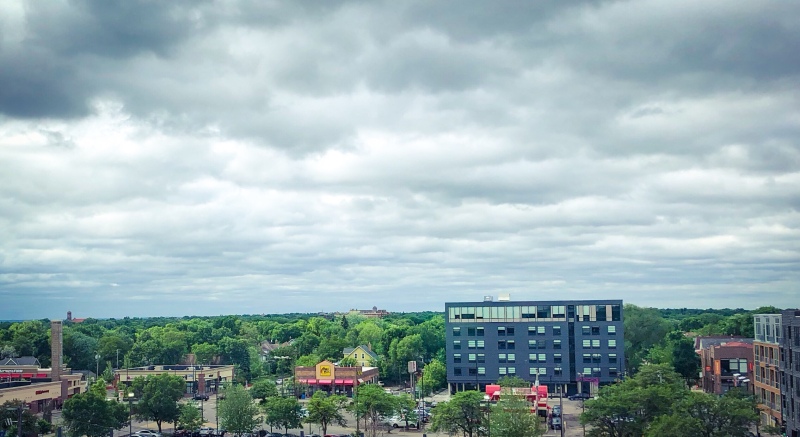 You can see and feel that we live on a planet. Our future prospects depend on the health (the resilience or vulnerability) of natural systems that make this planet hospitable for life as we know it.

The ability to observe Earth systems over time makes those who manage science assets in space into protectors. Our ability to seek, obtain, communicate, and deepen our understanding of our world, has the power to help us secure a livable future.

Because we cannot put aside that responsibility, we are beginning the work of connecting Earth systems science platforms to key non-science systems for data integration and decision-making.

Please fill out this form and submit your request or recommendations…