A few weeks ago, former Minnesota Governor Al Quie said to a small room that the climate issue requires the same approach he believes should drive all public service, and he expressed that approach in three simple ideas: Radical integrity, creative collaboration, and no excuses. It struck some of us as the most clear-headed, forthright, and appropriate way to talk about how to solve big problems and be of service in the world. With the Governor’s permission, we adapted it to be the theme of the Minneapolis 2015 Climate Action: Last Stop Before Paris.

In his essay “Self Reliance”, Ralph Waldo Emerson wrote that “The only thing that is, at last, sacred is the integrity of your own mind.” He did not mean that one should hear nothing from others, that one should not evolve, that one should depend on nobody, or that there are no other sacred things. What he meant was: if you hold in your mind a particular truth, you cannot put aside that truth to conceive a haphazard opinion elsewhere in your consciousness, no matter how convenient, without degrading everything that you know and think. What he meant was: we must all be honest brokers in all of our dealings, and we have to know that we are, hold all the relevant truths in our minds, or seek them, to ensure we do not stray from whole-minded self-awareness and good character.

In the same essay, Emerson also wrote that “a foolish consistency is the hobgoblin of little minds”. Having integrity does not mean never changing one’s mind. Having integrity means evolving with access to truth, and allowing for all thoughts, emotions, faith, and action, to evolve with that new awareness, so that one’s consciousness remains integral. Radical integrity, then, would be the commitment to oneself and to others that under no circumstance will one allow one’s mind to engage in the separation of truth from truth or in deception of any kind. Radical integrity is honesty in the thoroughgoing sense: not careless frankness or haphazard opinion-making, but a deep, spiritual engagement with truth, and a commitment to bear witness honestly, to act in line with truth and good character, and never to cheat in any way.

We need radical integrity to tackle climate change, because the problem itself arises from our past unawareness of the many ways in which our use of resources was a kind of cheating. What does radical integrity look like? During the Climate Finance Day in Paris, in May, Christiana Figueres told the ministers, advocates, and influencers gathered that “climate finance” was a term too narrowly construed. She said every aspect of how finance operates should reinforce climate smart practices. She called for radical integrity, a new financial sector that no longer drives the degradation of our climate system.

Gov. Quie also called for creative collaboration. For him, this is a matter of urgency; we should collaborate “aggressively”, not letting petty differences, parochial preferences or inconvenient details impede our ability to work together for the common good. We need constant creative collaboration on climate, at all levels, because no leader has enough power and no roomful of minds knows enough to engineer enduring success on all fronts everywhere.

This is not easy work; there are obstacles hidden at every turn, and for most who do the work of building momentum for better outcomes, there will never be any special recognition or gratitude from the wider world. It is easy to make excuses, and then abandon the task. But we are beyond that now… not only should we not make excuses; there are, in fact, no excuses to be made. Climate action will save lives, cost less, give us better outcomes, make us more prosperous, allow us to leave a livable future to our children, and make peace in the world far more likely. Inaction serves no recognizable value.

So, we go forward from Minneapolis 2015, and call on our leaders, our peers, and on people across the world, to work with radical integrity, creative collaboration, and no excuses. 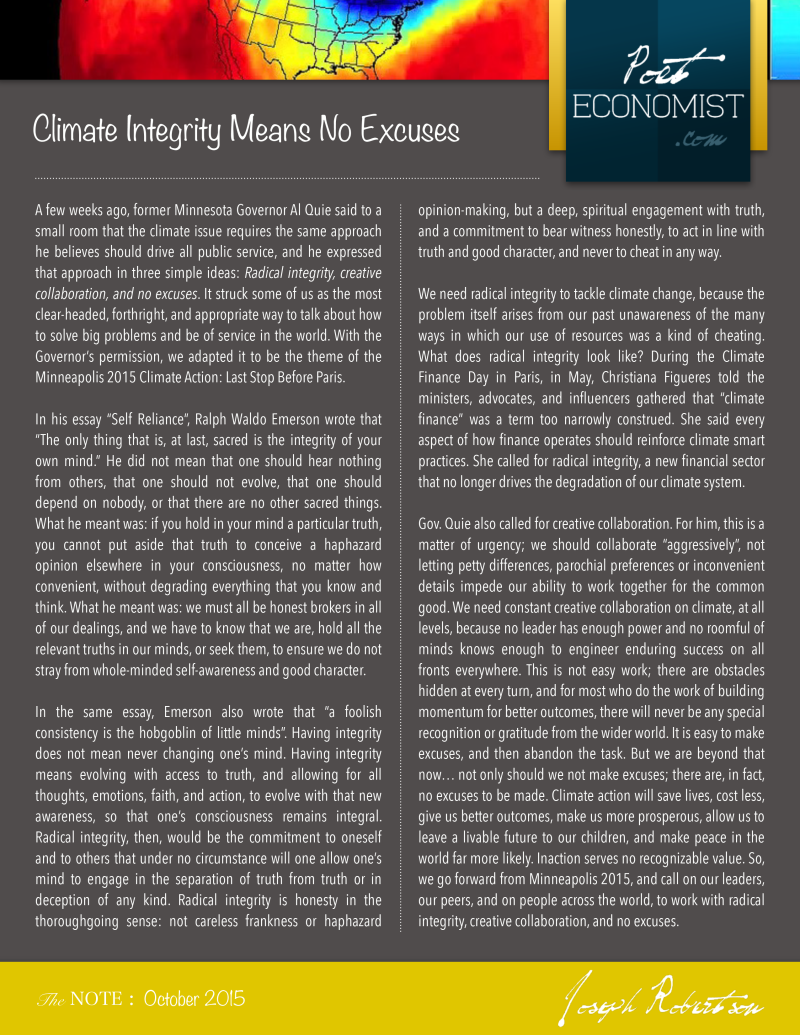