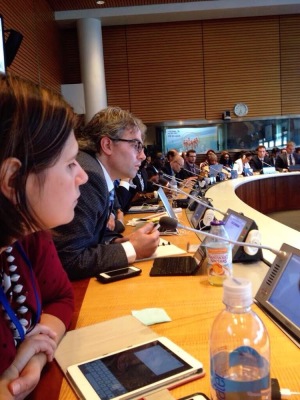 In the years I have been attending and contributing to the World Bank / IMF Civil Society Policy Forum, I have witnessed a distinct and ongoing evolution. Multilateral institutions like the World Bank and IMF, which are funded by and directed by governments, and which do business with governments, have direct impacts on elements of society that are not in the room when decisions are made. So civil society organizations have an important role to play in highlighting and reducing major risk areas, and in shaping policies that lead to better outcomes.

Initially, the role for civil society seemed to be to raise the alarm, to be a grievance mechanism for people who suffered negative impacts from decisions made far away. Top officials at the World Bank and the IMF, in those days, would often respond with explanations and justifications. They were effectively defending against criticisms from outsiders that people working at these institutions felt did not reflect their intentions, their capacity or their experience. Now, the relationship is far more collaborative and constructive.

The theme for this year’s Annual Meetings was Global Challenges / Global Solutions. It was the first time that the Civil Society meetings have been integrated into the Annual Meetings. The only barriers between citizen advocates and high-level officials came with the closed meetings that occur between governments or in direct negotiations with World Bank and IMF officials working on country-specific projects. And some of those meetings also included stakeholders.

This year’s ministerial meeting on climate policy included representatives from the business sector, so a wider scope of societal interest could be included. For the first time, the world’s finance ministers agreed that pricing carbon needs to be a priority both within their borders and globally. With stakeholders in the room, who can articulate the value to society of adopting the right policies to make sure our economy builds value, we can build consensus and get better policy.

Going forward, Citizens’ Climate Lobby and the network of support from the Pathway to Paris project will be working to make sure citizens without direct business interest are also invited directly into these negotiations. If citizens are not part of the conversation, then negotiations are far less likely to include real valuation of widespread generalized costs or an awareness of the political will to act responsibly. If citizens and stakeholders are in the room, the quantification of value is more likely to include real impacts on real people living their day to day lives.

We are fortunate that the World Bank’s climate change team, working under the leadership of Vice President and Special Envoy for Climate Rachel Kyte is committed to engaging with civil society, and to integrating hidden costs into economic, fiscal and development planning. It is also positive that we can report a new recognition across the Bretton Woods Institutions that the degradation of natural systems is a cost too high to pay for a boost to short-term economic indicators. 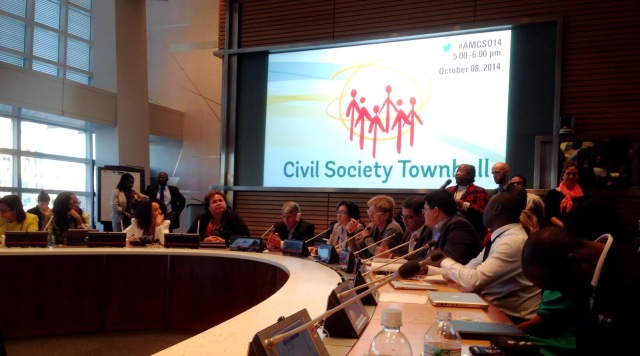 During the Civil Society Town Hall Meeting [video], I had the privilege of sitting directly across the big oval-shaped conference table from World Bank President Dr. Jim Kim and IMF Managing Director Christine Lagarde. Mme. Lagarde cited her institution’s support for carbon pricing and pledge to continue to work for an economically efficient carbon price and against the corrosive impacts of negative externalities from fossil fuels. Dr. Kim did the same, and added that “If you’re not at the table, I think you should be.” 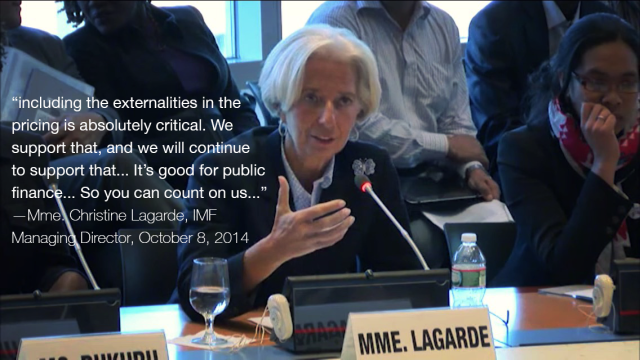 I want to thank both of these committed reformers for their leadership and for their commitment to the wisdom of inclusion, both in fiscal priority planning and in the policy-making process. Their leadership in the global arena where carbon pricing is up for grabs, in connection with their respect for civil society advocates, will be a crucial factor in building political will and building a climate-smart future economy. 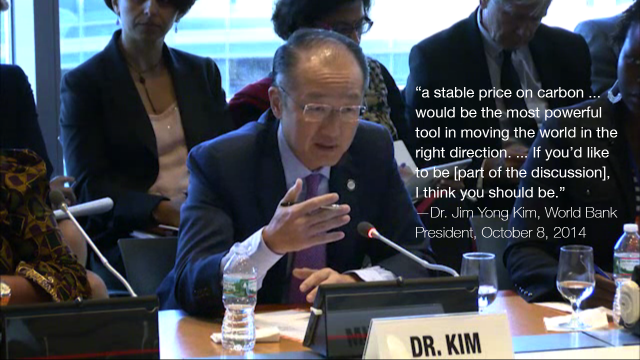 The world community is at a crossroads, in so many ways, so it is now all the more necessary to integrate civil society into government and multilateral decision-making. Doing so will improve the quality of democratic participation, but we must also recognize that world leaders and global policy-makers cannot pull together enough human-scale insight, at the rate required, by any other means.

At this fall’s Annual Meetings and Civil Society Forum, it was clear that the staff and leadership of the World Bank and the IMF now understand this dynamic of scale, insight and urgency. Some leaders remain uncomfortable with the prospect of being asked to answer for unforeseen consequences, complexities arising from already-existing corruption, or for a general failure to understand the human context. But the integration of locally active human insight into smart policy-making is now gathering momentum, and we can expect that trend will continue.

At the IMF’s session on Ethics and Finance, Archbishop of Canterbury Justin Welby called for a new kind of leadership. He said financial and political leaders need to exhibit “heroism in the classical sense,” which he described as a kind of othercentered understanding of leadership as service and which “leads to human flourishing.” The point was not lost on those present. Many said it shifted the tone of the rest of the Future of Finance sessions, and helped mark a turn where the IMF seems to be embracing a commitment to the human impact of its policies.

Throughout the meetings, I had the good fortune to meet and speak with genuinely impactful citizen advocates and civil society leaders, from around the world. Some were working to assist in the delivery of emergency aid to west African countries affected by the Ebola outbreak; some were working to make sure education, health services, clean water, or food, could reach those most in need.

An old friend from my student days, Jennifer Burden, was there covering the events of the week for World Moms Blog. Her presence was an indication of the degree to which major institutions are coming to value stakeholder engagement. Jennifer wrote this wonderful piece and highlighted some of the work being done by civil society organizations. Included in her report is Cynthia Changyit Levin, a grassroots leader in the crusade against poverty and hunger, from RESULTS, whose methodology of cooperation and empowerment gave rise to the organization I am so privileged to work for: Citizens’ Climate Lobby. 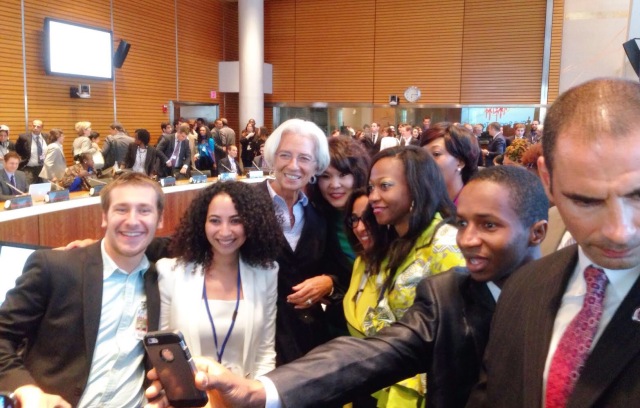 One of the people I met who stood out was Soukaina Hamia, who helps to run the Sidi Moumen Cultural Center, in Casablanca, Morocco. Motivated by a desire to see society work for the benefit of all people, she recognized the need to bring more educational opportunity to one of the poorest corners of her country. She does work many would have avoided attempting, and has succeeded in helping the young people she works with to change their future prospects and to open their minds to a world in which they will have a voice, and be a constructive force for good. 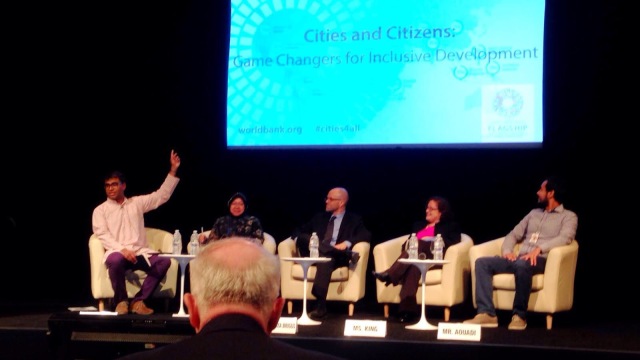 Danny Sriskandarajah, Secretary General of Civicus, is using his organization to build connections between people and government, around the world. Civicus bills itself as a global alliance for citizen participation. The organization is meeting a need: as we are more interconnected, we find more ways in which direct engagement with people affected by policy, by disaster or by routine governance and commerce, can bring us better results, more reliable collaborations, and a more stable and productive civil society.

The World Bank President has directed all development operations to move to a standard of 100% inclusive feedback from affected parties. At the end of the last session of the IMF’s full day of seminars on the Future of Finance, at the close of the Annual Meetings, the closing word was that global financial institutions have to reform their operations to increase their value to “the real economy”. In her keynote, Mme. Lagarde went as far as to say we must choose: “solidarity or seclusion“. She called for “a new multilateralism” and cited Maya Angelou’s urging that we “give birth again to the dream.”

Civil society means people working constructively with people, across the boundaries that separate interest groups and in ways that foster ongoing engagement, defense of rights and policies that lead to better outcomes at the human scale. That civil society is now this much engaged in the process of policy-making at the World Bank and the IMF is an important breakthrough for democratic process and for inclusive economic development. 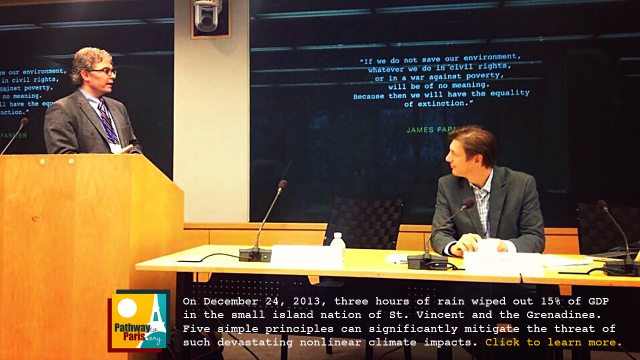 From the various sessions hosted by Civicus, and by other civil society organizations, including Citizens’ Climate Lobby, it was not hard to pick up on the new vocabulary running through the citizen engagement community: co-creating good policy and co-producing government. The idea that citizens have a role to play in helping policy-makers to create good outcomes is now taking hold, as is the idea that government without citizen participation is not really as legitimate as government that is co-produced by citizens engaged in the process.

A note of gratitude

For the success of the Civil Society Policy Forum, and its integration into the Annual Meetings, we owe a real debt of gratitude to John Garrison and the Civil Society Team, who have worked so hard, for many years, to facilitate genuine connections between World Bank and IMF policy-makers and groups representing citizens and civil society. Their efforts have been instrumental to opening a space where leaders and stakeholders can work together for better, more effective policy.

I also want to recognize the team of CCL volunteers and staff who have helped to build momentum for our participation in these meetings. To name just a few: Cathy Orlando, Mark Reynolds, Marshall Saunders, Sieren Ernst, Erica Flock, Dr. Daniel Richter, Clem Dinsmore, Katy McCreery, Peter Fiekowsky, and the tireless John Hansen. It is the work of so many citizen volunteers, working for CCL and for other organizations, that is making this transformation in citizenship possible.