Citing the 2010 Quadrennial Defense Review, Brigadier General Gerald Galloway (ret.), on Friday June 27, told representatives of the American Legion, the Veterans of Foreign Wars, the Earth Policy Institute and Citizens’ Climate Lobby, that “climate change is a threat multiplier” and will shape the future operating environment. As water and food become more scarce and life-supporting ecosystems are degraded, as the costs of coping with disasters rise, the opportunities for chaos and instability to take root also increase.

Excess thermal energy in the Earth’s atmosphere and oceans is disrupting systems that have remained stable throughout the history of the human species. That disruption is generating instability and uncertainty on a global scale. The impacts are most often felt locally (too little fresh water, too much rain too suddenly, river system degradation, more frequent wildfires), and they are different from place to place. The US Armed Forces are facing increasing pressures from the ensuing instability. Bases need to be redesigned or relocated, and combat readiness is either becoming more costly or more difficult to achieve.

Gen. Galloway’s work with the Center for Naval Analyses (CNA) and the Military Advisory Boardmakes him one of the world’s leading experts on the relationship between water and national security. Climate change is a threat multiplier, because the specific impacts threaten vital natural resource endowments that sustain life and make it possible to build civilizations that improve the human condition and allow us to better guard against natural, socioeconomic and geopolitical threats. 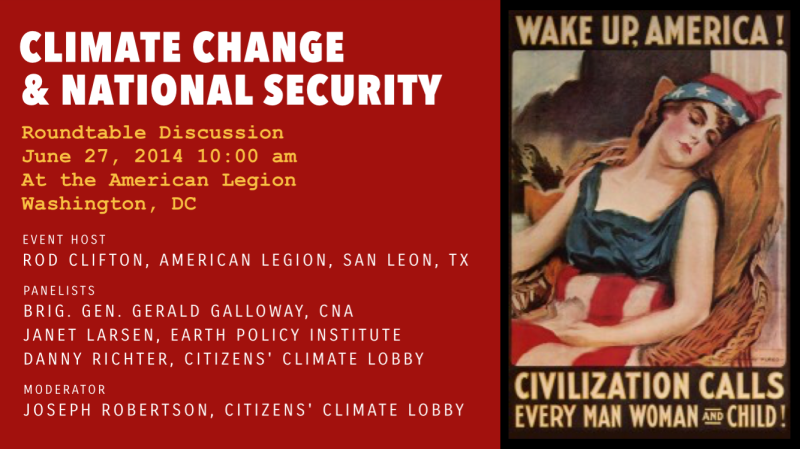 Gen. Galloway called climate change a “catalyst for destabilization“, affecting human populations around the world. For the US military, which operates around the world, the degradation of natural life-supports that underpin and provide for human civilization is a very real cost-matrix consideration. To be prepared for all of the nonlinear threats that flow from a degraded, interconnected climate system will be much more expensive, and one of the clear values of mitigating that threat will be a more cost-effective deployment of fully prepared security forces.

Three things Gen. Galloway said stood out the most, and should serve as a frame for the future work of everyone working on the convergence of climate dynamics and national security:

As a següe into the next presentation, Rod Clifton—a member of Citizens’ Climate Lobby’s Climate Security Team and of the American Legion, San Leon, Texas—cited the Spanish-language slogan stakeholders have used to raise awareness of prolonged pervasive drought conditions: “Sin agua, sin futuro.” What happens to the resources we need to survive affects the probability and the quality of our future existence.

Janet Larsen, Director of Research for Earth Policy Institute, put the security question in a different light: Is the world moving in a sustainable direction or not? The term “sustainability” has become so commonplace a register for environmental causes, we often lose sight of the core meaning: a sustainable activity is one that can continue into the future; an unsustainable activity cannot.

All aspects of the mounting, observable climate destabilization intersect in the world food economy. “Food is the weak link,” said Larsen, quoting Lester Brown, president of the Earth Policy Institute. As recently as the 1990s, grain yields were growing by 2% per year; now, they are growing by 1% per year. Population growth and economic expansion mean that is not enough to keep pace with growing demand.

For many decades, the United States and other agricultural leaders have been driving a global farming revolution, vastly expanding productivity per land area. But we have now harvested most of the “low-hanging fruit” by adding irrigation, pesticides and other tools of large-scale industrial farming. As it stands, soil erosion is now affecting 1/3 of all of the world’s crop land; water tables are falling fast in countries that contain half the world’s population.

190 million people in India are being fed by overpumped irreplaceable water from fossil aquifers. The deep aquifer under the North China Plain is losing 10% of its volume per year, putting one of the world’s major grain producing regions at risk of collapse. Climate change and soil erosion are pushing the US corn belt further to the north and west.

In many developing countries, most people are spending 50% to 70% of their income on food. Sudden or severe fluctuations in food and water prices can impose an unbearable burden on people in those markets. The result is quick and easy destabilization of political institutions, including entire national governments.

In what Ms. Larsen called “the new geopolitics of food“, bilateral agreements are being sought to circumvent existing markets for buying agricultural goods. Yemen, for instance, which is expected to be the first country to actually run out of water, is seeking a deal with Australia for affordable wheat imports, to avoid being priced out of world grain markets.

There is now an escalating competition for arable land, which China, Saudi Arabia and the United Arab Emirates, for example, seeking to take over farmland across Africa, while African countries see the land area available for domestic agriculture rapidly declining. South Korea has set up its own grain trading house in the United States, so it can deal directly with farmers who would otherwise be selling into open global markets.

The effects of an excess concentration of heat trapping gases in the atmosphere are directly impacting world food security and human health. While drought spreads and deepens across the American west, the 2010 Russian heat wave brought unprecedented fires to the edge of Moscow and killed 56,000 Russians. Each 1ºC rise above the optimal farming temperature for a given crop reduced yields by 10% to 16%. Corn, a staple of the American agricultural economy and of the global food supply, is particularly vulnerable to heat stress, which affects the water-conductivity of corn silks that nourish the actual kernels.

Gen. Galloway framed the food security and economic costs of climate destabilization with the admonition that we will “pay now or pay later.” Paying later, he said, would cost a lot more, because we will have failed to contain the problem sooner rather than later.

Citizens’ Climate Lobby’s Legislative and Science Director Danny Richter, PhD, spoke about a fiscally conservative, economically efficient way to price carbon emissions and build value into the everyday economics of American households. The Fee and Dividend plan imposes a steadily increasing fee on carbon-emitting fuels, at the source, and returns 100% of the revenues directly to households, as a monthly dividend or rebate check.

A new study by REMI (Regional Economic Models, Inc.) shows that the 100% dividend helps to shift investment patterns away from capital intensive industries that don’t build value locally to industries that thrive on expanded local hiring and a more robust Main Street economy. Without the Fee and Dividend plan, the US economy is on course to see the labor share of income decline, with real personal wealth also shrinking. With the Fee and Dividend plan in effect, the labor share of income expands, real disposable personal income also increases, and consumer activity drives a $1.3 trillion expansion of GDP over 20 years, while preventing 227,000 premature deaths and reducing carbon dioxide emissions to 50% of 1990 levels, by 2035.

By reducing the market distortion relating to the pricing of carbon-based energy, and building added value into the economic activities of the average household, the Fee and Dividend economy allows more entities across the American marketplace to come to grips with the need for climate risk management. This includes building resiliency and transitioning to low-carbon energy, but also planning to face the financial risk associated with carbon-intensive investments.

The roundtable clearly made the case that action to mitigate out of control climate change is needed, if we want to provide a secure future for American democracy. But it also showed that we need to engage in risk management, with a focus on security risks, economic risks, and threats to the human food and water supply.

Gen. Galloway added that “Knowledge is resident at the local level.” This is true of climate impacts, of economic vulnerabilities and priorities, and of security risks. But a failure to connect the global picture to the local experience can amount to a highly dangerous blind spot. The American Legion, the Veterans of Foreign Wars, and the Citizens’ Climate Lobby, all have local teams that can begin to talk and to work together.

One of the most interesting and encouraging lessons to emerge from Friday’s Climate Change and National Security roundtable discussion is that by engaging with each other, and with the policy arena, citizens who are members of these groups can build their voices into the planning of a freer, smarter and more secure future. In the words of Rod Clifton, “We’ve got to do something, and we’ve got to do it now. We don’t want a Pearl Harbor-type event.”

This roundtable was the beginning of a discussion, between and among interested groups and concerned citizens, about how to build support for policies that will give us a fighting chance at a climate-smart future. It should serve as a model for discussions of local impacts, hidden costs, mitigation options, and collaborative solutions. Our best hope at being genuinely secure and prosperous in the future is to make the choices now that gives us that climate-smart economy.

On Monday, March 2, the Proceedings of the National Academy of Sciences published a study titled “Climate change in the Fertile Crescent and implications of the recent Syrian drought“. The study links the onset of the Syrian civil war to the severe and pervasive impacts of a prolonged drought in the region, the worst known from the instrumental record. The abstract of the study reads:

Before the Syrian uprising that began in 2011, the greater Fertile Crescent experienced the most severe drought in the instrumental record. For Syria, a country marked by poor governance and unsustainable agricultural and environmental policies, the drought had a catalytic effect, contributing to political unrest. We show that the recent decrease in Syrian precipitation is a combination of natural variability and a long-term drying trend, and the unusual severity of the observed drought is here shown to be highly unlikely without this trend. Precipitation changes in Syria are linked to rising mean sea-level pressure in the Eastern Mediterranean, which also shows a long-term trend. There has been also a long-term warming trend in the Eastern Mediterranean, adding to the drawdown of soil moisture. No natural cause is apparent for these trends, whereas the observed drying and warming are consistent with model studies of the response to increases in greenhouse gases. Furthermore, model studies show an increasingly drier and hotter future mean climate for the Eastern Mediterranean. Analyses of observations and model simulations indicate that a drought of the severity and duration of the recent Syrian drought, which is implicated in the current conflict, has become more than twice as likely as a consequence of human interference in the climate system.

This echoes the report given by one of the Free Syrian Army’s commander’s in the documentary Years of Living Dangerously, last year. He explained to reporters that he had been a farmer, but over the years it became more and more difficult, and then impossible, to make a living and even achieve basic sustenance. His local perspective was that “this is a war of hunger”, citing drought, water shortages, and incompetent government response to the crisis, as reasons for the ferocity of the uprising.