When Russian Federation president Vladimir Putin sent military and paramilitary forces to the Crimean Peninsula, to protect Russian naval interests there, a demand began to spread for Europe and the US to impose sanctions on Putin’s government. This led many to assume that Europe, and Ukraine more specifically, would need an infusion of natural gas supply from North America, to provide an economic cushion against Russia’s use of gas supplies as a bargaining chip.

But feeding more supply into the global fossil fuel system that empowers Mr. Putin (and his misuse of needed fuel to impose his will on foreign states) disempowers Ukraine, while prolonging Europe’s reliance on carbon-based fuels. Putin treats Ukraine as both a transit point and a dependent client, a combination that serves to pressure Europe and expand his reach. What’s more, it has been estimated that while such a move would do nothing to reduce Putin’s clout, and might empower him further, it would also cost US consumers and businesses an additional $62 billion over just the first year of the supply transfer.

On March 18, Thomas Friedman called for “a new moonshot”, in his column in the New York Times. Physicist Peter Fiekowsky had suggested the same months earlier, detailing the feasibility, with coordination and commitment from across our society, of transitioning to 100% clean, renewable fuels.

Fiekowsky showed this “new Moon shot” could be the unifying narrative that builds not only civic and economic cooperation, but also the technical and scientific knowledge required to build a truly resilient prosperity in harmony with nature’s life support systems. In his column, Friedman showed the transition would provide a real counterweight to the reflexive bullying tactics of petrostate authoritarians.

A distributed clean power-generation system provides local sources of energy and builds assets and value closer to home. It also, by extension, provides greater probability of long-term energy sovereignty. Just as a home or business can generate cleanly at home, and import less from suppliers, so can a province or a nation. By building a robust, distributed clean power-generation economy, European Union member states and states seeking independence from Moscow’s sphere of influence, like Ukraine, can remove energy resource bullying from the equation of international politics and disallow dangerous manipulations (in 2004, 35,000 people were killed in France when power failed due to a shortage of imported Russian gas; now, Ukraine, Crimea and other nations and subnational regions face military annexation supported by the same tactics).

The future of energy is not in the burning of hydro-carbon molecules. Using natural gas to respond to Putin’s oil and gas-infused aggressions empowers the resource markets that empower Putin. What Russian border states need is support from foreign powers with zero vulnerability to such fuel supply dynamics.

Power accrues to those who provide value, or who can limit its flow. Providing added leverage to people, communities, regions and nations, to engage the wider world from a posture of energy sovereignty, precludes many of the abuses of tyrants and propagates good-faith dealing, and democracy. 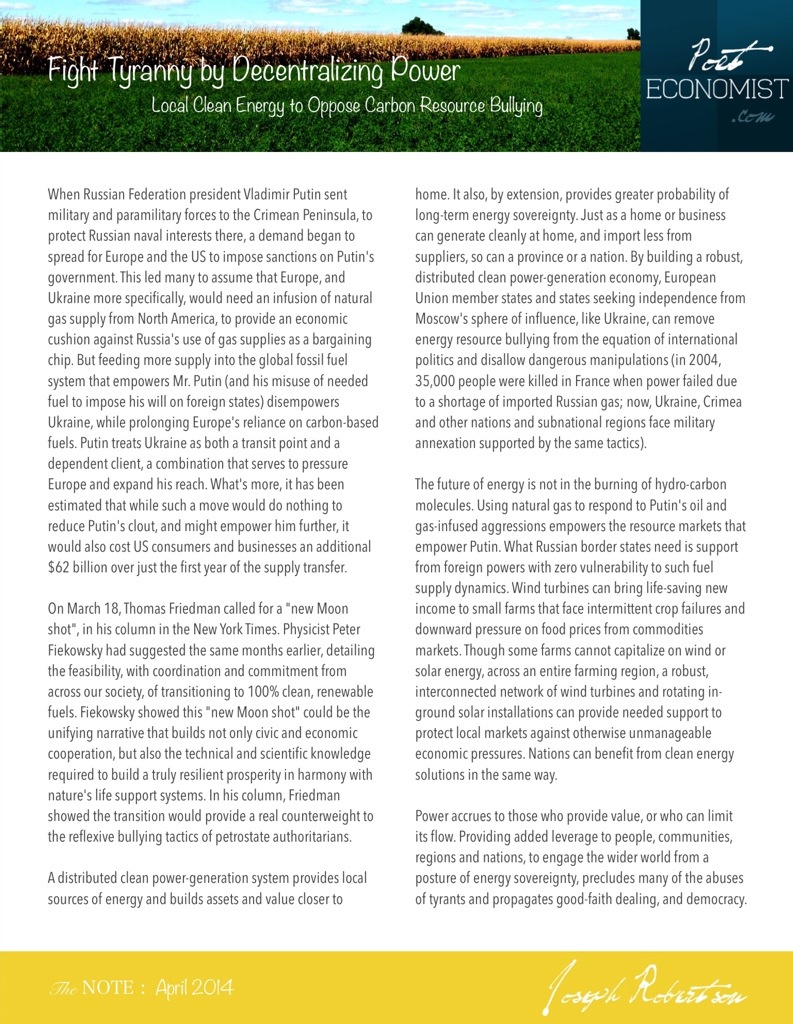