In order to ensure that our economic and environmental policies harmonize with the life-as-lived interests of ordinary human beings, at the human scale, a grassroots movement of citizens has begun working to steer the US Congress away from corporate backers and toward people-centered solutions. The American economy’s dependence on fossil fuels carries an incredible burden of hidden costs, and the American people are increasingly aware that clean energy will make the nation more prosperous, more environmentally stable and more democratic.

Citizens Climate Lobby is a non-partisan, non-profit volunteer organization, with over 60 local chapters in 26 states, and more in Canada. Founded in late 2007, by the anti-poverty crusader and microfinance hero Marshall Saunders, its first national “conference”, in Washington, DC, in 2009, brought Marshall, along with organizing wizard Mark Reynolds and scientist Danny Richter, to Capitol Hill to press Congress to end the nation’s addiction to carbon-based fuels.

In June 2010, CCL’s first true volunteer conference brought 25 volunteers from across the United States together for informational seminars, lobby training and Capitol Hill visits. That small group met with 52 Congressional offices and several more from the executive branch. In 2011, it was 80 volunteers, making 144 visits to Congressional offices. Since then, CCL has begun participating in the World Bank Civil Society Forum, to urge representatives from the World Bank, IMF, OECD and other international development organizations to lead in the push for a price on carbon-based fuels.

For the first time, in 2012, the legislative solution CCL supports has already been introduced into the Ways and Means Committee of the House of Representatives, and members of Congress can sit with citizens to hear them call for sponsorship of pending legislation.

In 2012, 175 volunteers attended, from across the United States and Canada, making more than 300 visits to Congressional offices, in just 4 days of lobbying, while personally delivering materials to the rest of the House and Senate—a feat made possible by the scheduling acrobatics of Amy Bennet and a dedicated team of interns.

By early 2010, the organization had foreseen that the highly complicated regulatory strategy known as Cap and Trade—with its trading scheme ripe for derivative finance shenanigans—would not become law. So, by June of that year, CCL was working to get the word out about a proposal called Carbon Fee and Dividend. The strategy is simple, streamlined, revenue-neutral, consumer friendly, requires no new bureaucracy, is easy to harmonize internationally and will do more to reduce carbon dioxide emissions and speed the arrival of a true clean-energy economy.

The 100% dividend ensures that more than 2/3 of all households will receive more in their bonus check than all collateral price increases resulting from the fee. As the fee escalates, so does the dividend. This clear price signal allows the true marketplace—Main Street, USA, together with cutting edge innovation and entrepreneurship—to take over, giving renewables an edge, even without subsidies, and releasing hundreds of billions of dollars in private capital to go to work building a fuel free all-clean-energy economy, suited to the global challenges of the 21st century.

The CCL approach allows ordinary citizens to gather together, to better reach local and national media, build support among voters and raise the level of debate in the halls of Congress. In 2010, it was Cap and Trade or bust on the Hill; in 2011, Fee and Dividend was intriguing to both liberals and conservatives on the Hill, but too new to catch fire and lead the debate; in late 2011, however, the Save Our Climate Act (SOCA) was introduced in the House Committee on Ways and Means, and was built on the Fee and Dividend model, though it devotes a portion of revenue to debt reduction. 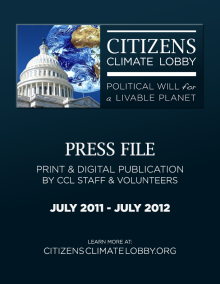 From July 2011 through July 2012, CCL’s volunteers and staff have published three hundred articles in local and national newspapers and on major blog sites like the Huffington Post. Thanks to the tireless efforts of media director Steve Valk, and volunteers like Ellie Whitney and Mike Morton, CCL has been able to release a 424-page July 2012 Press File compiling these letters and op-eds.

In 2012, every office on Capitol Hill has been made aware of Fee and Dividend, of its Main-Street-focused approach, and SOCA is likely to go to a 100% dividend in the new year, increasing the monthly bonus paid to households and making the bill’s economic impact into more of a virtuous feedback loop capable of building a thriving 21st century clean-energy economy.

The strategy is supported by mainstream economists, social and fiscal conservatives, by Reagan advisors and progressive members of the House of Representatives, and by the world’s top climate scientist, James Hansen of NASA. Reagan chief economist Art Laffer and former House Republican Bob Inglis, a social conservative, are now calling for a revenue neutral carbon tax to break the nation’s dependence on costly fossil fuels and speed the transition to a clean economy.

CCL’s successes constitute a regeneration of participatory democracy, with a focus on the nation’s climate and energy policy. The same model has been used with astonishing success by Results to win Congressional support for action to eliminate poverty, treat and eradicate disease, and overcome social exclusion, around the world. Tens of millions of people have been lifted out of poverty by the work of Results volunteers over the last three decades.

This year’s conference recognized the importance of the Quechua-language phrase “Kachkaniraqmi“—”I am here; I still exist.” Vibrant, constructive participatory democracy requires that people dwell in this world in a conscious way, and show up where decisions are made, to be citizens and to remind elected officials that we are here; we exist… and that, above all other considerations, that matters.

“If you want to join the fight to save the planet, to save creation for your grandchildren, there is no more effective step you could take than becoming an active member of this group.”
— Dr. James Hansen
Physicist, member National Academy of Sciences, grandpa, head of Goddard Institute for Space Studies, NASA