The BBC reports that:

The machine is made from 17 molecules of the chemical duroquinone. Each one is known as a “logic device”.

They each resemble a ring with four protruding spokes that can be independently rotated to represent four different states.

One duroquinone molecule sits at the centre of a ring formed by the remaining 16. All are connected by chemical bonds, known as hydrogen bonds.

The structure is just 2 nanometers in diameter, and can produce 4 billion different permutations of chemical transmission of “information”. This allows for a far more efficient distribution of information than a traditional binary circuit.

The researchers say the structure of the “chemical brain” was inspired by the activity of glial cells in the human brain. Glial cells are non-neuronal “glue” or connective cells. In the brain, they are estimated to outnumber neurons by 10 to 1 and assist in chemical transmission of neural signals. Their ability to transmit signals in parallel, or to multiple tangent cells at once, reportedly gave rise to the 17-molecule duroquinone design.

In recent years, the ability of research teams and engineers to keep pace with “Moore’s law” —which predicts that computing speed (by way of the reduction in size of processing units or the increasing density of circuits possible in a given space) will double roughly every 18 months— has been tested, due to heat-diffusion constraints and the related energy bleed. 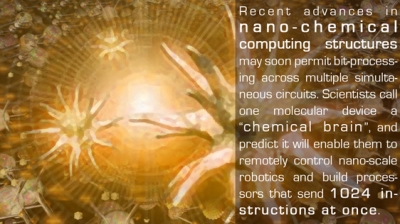 Nano-chemical processors would enable an entirely new structure for the smallest-scale computing circuits, and could lead to serious advances in the nature and capabilities of microprocessors, which are far larger in size and could therefore contain many times more circuits than at present.